Buying a Home in Colorado Springs

You are here: Home1 / Buying a Home in Colorado Springs

When moving and buying a home in Colorado Springs – or anywhere – your family’s home-buying needs are special and unique. Whether you are new to Colorado Springs, or are a longtime resident looking to relocate within the Pikes Peak area, it’s important you have expert help and high-quality buyer resources. To make the process easier and maybe even fun, The Becky Gloriod Partners has put together a list of tools to assist you in your journey.

Want to receive email and/or text notifications when homes that meet your criteria come on the market?

Contact us at 719-229-9777 or becky@gloriod.com to have our team set you up on a custom home buying portal in the Pikes Peak MLS, the source of local listings. Our priority is to give you a competitive advantage, save you time and money, and reduce stress associated with buying a home. There’s no doubt every agent you meet will tell you they are experienced, ethical and professional. But shouldn’t all real estate agents possess these qualities?

The Becky Gloriod Partners live and breath these essential qualities. Our team has over 60 years of combined experience in the real estate industry. Our passion for excellence – and for Colorado Springs – has led us to be one of the top real estate firms in Colorado Springs since 1998, with over $33 million in sales volume in 2021.

Before you sign a buyers’ agreement with just any agent, contact us. We’ll explain why you can expect a different home buying experience – an experience focused on protecting your interests and making your home buying transaction a success. 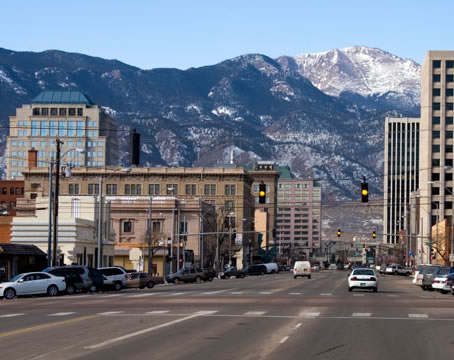 The Appeal of Colorado Springs

Colorado Springs was founded in 1871, due to its location 70 miles from Denver, and its climate – the dry mountain air successfully treated tuberculosis, and made the Pike’s Peak area a health mecca. Unlike many cities in Colorado which were founded by miners and ranchers, William Jackson Palmer founded Colorado Springs with visions of being a resort town always in view of Pike’s Peak.

Now, Colorado Springs has grown to a population of  over 464,871 (2019), and a land area of 196 square miles, making it Colorado’s largest city in terms of land, and second only to Denver in population.

All About Colorado Springs

Colorado Springs has numerous dance and theatre companies that offer performances, workshops, and classes.  The Fine Arts Center is one of the Pike’s Peak area’s leading art centers, with a world-class art museum, performing arts theatre and a school of art.  The Pikes Peak Center, which serves as a regional entertainment and cultural center, provides quality entertainment, and cultural and educational events, hosting more than 200 performances annually.

With consistent top-ten rankings in Men’s Fitness Magazine’s “Fittest Cities in America”; Colorado Springs has proven to be a recreational paradise. For those who enjoy the outdoors, there are hunting, fishing and camping areas in and around Colorado Springs. Colorado Springs is also just a few hours from many popular skiing destinations, including Vail, Keystone, Breckenridge, Monarch, and Aspen.

If you enjoy college football, the Air Force Academy’s Falcons play against powerhouses like Brigham Young in inter-league play, and engage in inter-service play with the Naval Academy and West Point.  In other college sports, Colorado College consistently provides excitement with their nationally-ranked hockey team.

With one of the highest graduation rates in the nation, greater Colorado Springs is recognized for its excellence in education.  Nearly 90,000 students attend school in ten individual public school districts, each of which is well-funded through a combination of state funds and levies on local property taxes, serve the area.  Colorado Springs is also fortunate to have a number of excellent private schools.

Business Week: Named one of the Best Places to Start Over
Sunset Magazine: Fittest City in West